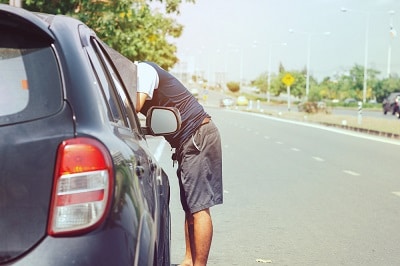 If you own a car or have been around cars, then there is probably a time that the car did not start. This can be frustrating because it can happen randomly out of the blue.

This means that one night the car could appear to be running fine and then the next morning you go out and it does want to start.

This can happen for all kinds of reasons.

After reading this article you will know some of the more common reasons why your car will not start. You will also learn some ways to get around these problems, so you don't have a major headache or a ruined day.

So there are actually two main kinds of the car not starting:

The most common situation to be in, is to have a car that doesn't crank or cranks slowly, if it isn't starting.

The reasons could be a variety of things, but the most common problem when a car doesn't start is a dead or low battery.

If you have a dead or low battery, then when you turn the key it will make a slow RRR sound that as the voltage drops will turn to more of a clanking or K-K sound.

If the battery is completely dead, then it won't make any sound at all when you turn the key.

Causes of a dead battery can be anything from the battery getting old and not holding a charge, to a light getting left on.

Most modern cars the headlights go off on there own, but if a door doesn't get closed all the way the dome light might stay on. This will drain your battery and make it so it gets low and can't start.

To fix a low battery all you need is another car and some jumper cables.

You hook the cables up to the other car's battery and with the other car running turn to the key to start your car. This will get it going.

You can then drive to a parts store or shop and have the battery tested.

If it isn't the battery itself and the car won't turn, then it still might be a part of that system. It could be your alternator has gone bad or is failing.

The alternator is what charges the battery as you drive. If it isn't working right, then the battery won't charge. At first, a bad alternator may not trigger a light on your dash, but eventually, it will once it starts to put out to low of voltage.

Also, another thing that could cause the alternator to not work right is if the drive belt gets wore out. If it isn't turning things, then it may not be charging the battery.

The next problem could be a bad starter.

If you turn the key and no sound comes out, then it might be the starter being dead. The starter could have a few things wrong with it and cause your car not to start.

No sound means a bad solenoid or bad ignition switch. If it grinds like a weak battery sound, then it means it is drawing to much power.

If there are clanking sounds when you turn the key, then it means that the starter drive gear could be damaged where it connects to the flywheel.

Lastly, you could have an anti-theft feature that got in-gauged causing the key to not turn and the wheel to be locked.

To fix this just nudge the wheel till you can get the key to turn. Also, one last thing is to make sure the car is in park because if it got left in any other gear, then the key will not turn either.

No cranking are the more common problems, but one really common problem is one that the engine still cranks but won't start. That is no gas or low gas.

If you shut your car off and the gas light was on or the tank was low, it may not have enough left in it to start again. This means the engine will turn, but won't be able to go all the way over.

If you think that is the problem, then put some gas in the tank, and it should start.

If putting gas into the car doesn't fix the problem, then it might be a bad fuel pump.

The fuel pump is what moves the gas to the engine from the tank and if it is going out, then not enough gas might be getting through. Clogged lines can also cause this problem, so cleaning the fuel system can help you determine if it is the fuel pump or clogged lines.

After cleaning, if it still won't start then that means it might be the fuel pump. You will have to replace it yourself or have someone replace it.

Another way to know if it is the fuel pump before having it replaced is by listening to it. When you first turn the key you should be able to hear it before you start cranking the starter. If you can't hear it, that is a sign it is weak or dead.

Sometimes fuel lines can still freeze and this is similar to being clogged with dirt.

If it is cold, then you can use a can of ISO-Heet to thaw the fuel. Also, in cold weather, it is a good idea to keep at least a half a tank to prevent water from getting into the system.

Another rare but possible issue is bad spark plugs. Spark plugs only need to be changed around 100,000 miles, so if it has been a while changing them might be the simple fix to get your car running again.

Lastly, the security system could be the issue, even if the car cranks. Remote keyless entry could bug out or you may misplace the fob that needs to be in the car to get it to start. If you try to use the wrong key it can also lock you out, so if you have a newer car make sure to use the right key and have the key by the car when trying to start it remotely.

So now you know some of the common reasons why a car won't start. It could be something as simple as a dead battery or low gas, or something more complicated like a bad fuel pump or alternator.

Hopefully after reading this though you have a basic idea of what could be wrong and can figure out the problem on your own if it isn't a major one, so it doesn't cause to much delay in your day.