How To Tell If A Car Battery Is Dead? 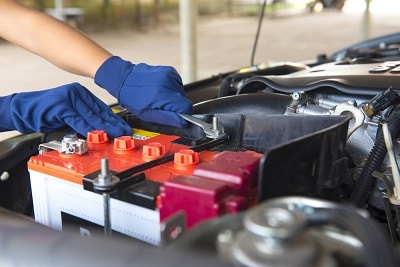 A dead car battery is one of the most common reasons why your car won’t start out of the blue when you go to start it. It can be dead for different reasons, and sometimes it is genuinely dead while other times it was just drained.

This article will go into how to tell if a car battery is dead, and also help you figure out if it was just a one-time thing from being drained or if it is indeed dead and time to get a new one.

There are a lot of signs that your car battery might be dead. We will go into more detail of each in its section, but the main ways of knowing if your car battery is dead are slow engine crank, check engine light, and issues with other dashboard lights or electronic components.

Also, there are a few other less visible signs, but still important ones, especially when it comes to troubleshooting. Those are swelling of the battery and odd smell to the battery.

The most prominent sign of a dead battery is a slow engine crank or clicking engine. The battery works with the starter to get the engine to turn over.

If the battery does not have enough charge left in it, then it can not get the starter going enough to get the engine to fire.

The first time a week battery tries to start the engine, it might work but will be slower and take longer. It is essential to be familiar with your car and how long it usually takes to turn over because if it is slow, it might be your last shot to start the car without jumping it.

If the battery is already too far dead, then instead of having a slow engine crank it won’t start at all. Instead, when you turn the key, you will have a clicking or grinding sound.

The next most accessible sign to know if your battery is dead is to pay attention to the power features in your car. For example when you open the door if your dome light does not come on or is not as bright as it usually is, then that is a good sign your battery is weak.

Your battery also powers every other thing in the car. If you stick the key in the ignition with your door open and it doesn’t beep at you, then that is also an indicator that your battery is low or dead.

Other things you can turn on to confirm that it is the battery and not just a fault in that one particular system is you can turn your headlights on, your radio on, try to use your windows or even your wipers.

Some cars will have a check engine light or battery light on the dash when the battery is starting to get old and wear.

If you get a check engine light or battery light, then that is an easy way to know that the battery is having issues though. Not all battery lights though mean the battery.

Depending on the car if other lights come on with the battery light coming on it could be telling you that the alternator or something else is going bad.

If you get any lights on your dash, it is a good idea to use an obd2 scanner on it or have someone do that for you so you can know precisely what is wrong.

The last sign is a visual one that you have to check under the hood for. When you go to jump the car, you may notice that the battery looks swollen or smells funny.

This is because chemical reactions are going on in the battery and as it ages it starts to swell or smell.

If your battery is old, then this is a good sign to know that the battery being dead wasn’t just a one-time thing but will keep happening.

How To Know When To Replace Battery

Sometimes the battery being dead is just a one-time thing or a fluke. You might not have shut the door all the way, and the dome light or headlights could have drained it. This has happened to most people.

The best way to know if your battery is truly dead or just got drain from an outside cause is to have a battery test ran on it. You can use a voltmeter or a automotive multimeter  and see how much charge it has, but this won’t tell you if it is going to hold it.

Also, you might have a short in a system drawing on the battery, and a volt meter won’t help you with that either.

The best thing to do is take your car to a shop or any auto parts store. They will have a battery load tester. This device hooks up to the battery like a volt meter and can give you a readout of the current voltage and any draw being put on it.

Also, you can run a road test and rev your car for around thirty seconds while the machine is attached. This will let you know if the alternator is charging the battery, how much draw is being put on the battery, and the health of the battery. If the battery is old, this is the best way to know if you should replace it or not.

So there are a lot of signs that a battery is dead or dying. There are a mix of visual symptoms and also audible signs. First just pay attention to when you start your car, and if it seems like it took longer to turn over, then you might want to have the battery checked.

Also, pay attention to when you get in your car. If lights don’t turn on or if the vehicle doesn’t ding once you put your key in when the door is open, then the car battery is most likely dead. It could have just got drained from accidentally leaving something on, but if it is old, then it is probably not holding a charge which means it is time to get a new battery.