What Happens When Your Car Runs Out Of Gas? 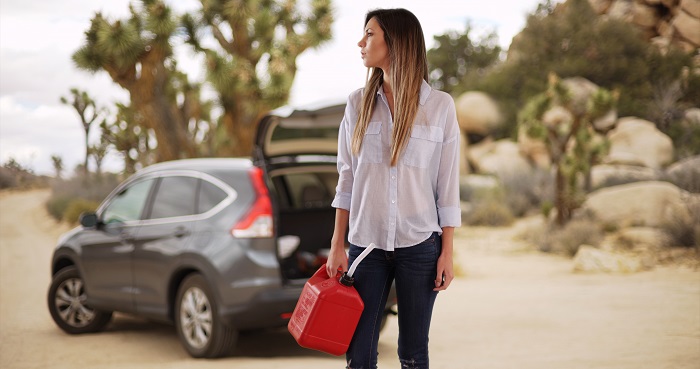 No matter if you are an experienced driver with decades behind the wheel, or just recently got your license, running out of fuel is a stressful situation. You will no longer get to your destination on time and on top of that, you have to explain why you’re going to be late.

Most times, when a car runs out of fuel it is due to driver error. In unfortunate situations, the fuel gauge could simply stop indicating how much gas you have left in the tank. And don’t think for one second that somehow you are getting incredible fuel mileage. If the fuel level stays the same and you have driven a while, something serious may be up with your fuel gauge.

Luckily, most of us have some sort of roadside assistance like AAA, that will come and save us if this happens. Back in the day, drivers used to carry a Jerry can full of fuel for these exact situations. But like with anything else, times have changed and people no longer put such a big emphasis on running out of fuel.

Additionally, gas stations have popped up at every corner and cars are now more fuel-efficient than ever. Besides, no one wants their vehicle to constantly smell like gas.

We are going to go over some of the most common reasons that a car runs out of gas and what to do if you find yourself in this situation. Even if you’ve never run out of gas, you should inform yourself in case this embarrassing circumstance arises.

Why do cars run out of gas?

We briefly touched on this subject at the start, but we are going to elaborate on it more in this section. Let's have a look a the most common reasons that cause a car to run out of fuel.

Not enough gas in the tank

If you get overconfident about how far your car can go on the fuel you have left in the tank, you might end up stranded on the side of the road. Time and time again we see people pulled over on the shoulder and makes you wonder: “What happened to their vehicle?”

Today’s vehicles are equipped with an on-board computer that will tell you exactly how many miles you have left until empty. These calculations are done by taking into consideration your overall fuel economy.

Therefore, if you end up punching it or driving your vehicle in a more “sporty” fashion, chances are that your trip computer will overestimate that number and you will get LESS MPGs. Either way, it's never good to let your vehicle run out of fuel.

We’ve all seen it. A fuel gauge reads empty one minute and magically goes to full the next. No this isn’t some sort of trick that turns air into gasoline, it’s more than likely a defective sender unit. Gas tanks have a sensor inside of it that tells your gauge exactly how much fuel is left.

Older sender units worked by having a float inside to tell you how much driving you have left before it's time to fill up again. Nowadays, it is based on an electronic sensor that can go bad from time to time.

In rare cases, the fuel level remains in the same spot, making you think that fuel economy has skyrocketed when in reality you are about to run dry.

Common Signs Of A Low Or Empty Fuel Tank

When you run out of gas your engine will eventually shut off, but this doesn’t happen instantly. Ever heard the saying: “running on fumes”? While there is no possible way for your car to run off fuel vapors(not that we know of), a vehicle will start to show a few signs that it is extremely low on fuel.

While on its last legs, an engine will begin to sputter. For the driver, this means that the car will start to shake and vibrate. Any unusual vibrations should be taken seriously, no matter what their root cause is.

If you notice your car's gas gauge is empty and the car starts to sputter, it is probably a good sign that you will run out of fuel in the next few miles.

You put your foot down and nothing happens. You think to yourself: “Hmm, this is weird, I wonder why my car’s not accelerating?”

One of the most common side effects of low fuel is little or no acceleration. No fuel means no combustion. No combustion means your car will not make any horsepower. If on empty, some fuel injectors may have residual fuel left in the lines, making your engine continue to run. However, that’s not enough needed to give you the acceleration you expect when putting your foot down on the accelerator pedal.

Problems Caused By Your Car Running Out Of Gas

In a gasoline-powered car, running out of fuel is not likely to cause any permanent damage, but it isn’t good for your engine. The last few quarts of fuel in a gas tank tend to house all the contaminants that have entered the fuel tank over the years.

Yes, your car does have a fuel filter, but some microscopic particles will still make their way through it. This means that it can affect both your fuel pump and the fuel injectors.

Each fuel injector has a tip that atomizes the fuel going into your combustion chamber. Any particles, no matter how small, have the chance of clogging them up and causing them to fail. Sometimes, fuel injectors can be cleaned, but in most cases, the damage is too severe to salvage them.

Some diesel engines require their fuel pumps to be constantly under load. If there is a loss of fluid, such as you running out of diesel, they could become seized. Repairing this issue can run in the hundreds, if not thousands of dollars.

Always make sure you have enough fuel in your tank, no matter if your car or SUV is powered by diesel or gasoline.

What To Do If You Run Out Of Fuel?

Running out of fuel is never a fun experience. It does not matter if it's your 1st or 10th time, it never stops fails at embarrassing you. Regardless of how it happened, here are some steps that should be followed if you run out of gas.

If you notice any of the symptoms listed above, such as sputtering or loss of power, you should pull over as soon as possible. It may be just a hiccup or may be signs of more serious issues. Either way, you shouldn’t go any further until you know what initially caused the problem.

This should go without saying but checking your fuel level is a sure way to confirm that you are out of fuel. Nowadays, the only way to check your fuel level is to look at the gauge. If your car has an on-board computer, you can compare the “mileage to empty” feature to confirm your suspicions.

If you don’t have a spare jug of fuel in your trunk(no one does nowadays), call someone to bring you a few gallons. This will help you get to your nearest gas station to fill up. If calling someone is not an option, you might have to set out foot yourself.

At the very least, you should have a spare, empty gas canister in the back of your vehicle for emergency situations like these. Gas stations do sell them, but they charge an arm and a leg for them because they know you need one in emergencies.

No matter if you have a diesel or gas-powered vehicle, running out of fuel is never good. It can cause serious harm to your vehicle and can be embarrassing. Doing the walk of shame to get more fuel is the one thing that no one looks forward to.

Do yourself and your car a favor. Always have enough fuel in the tank to safely get to your destination. However, if the unfortunate happens you can help prepare yourself by reading this article.

And as always, if you have any questions, don’t hesitate to ask us. We are looking forward to hearing from you soon. Be sure to check out our other articles too!