What Does It Mean When Battery Gauge Goes Up And Down? 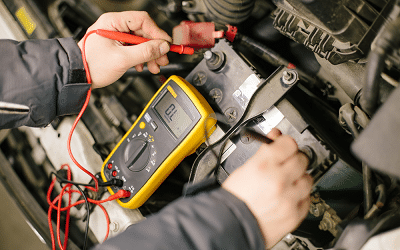 A key component in any vehicle is the battery. If the battery is not working right, then the rest of your car will not work right either. The main problem that happens with batteries is that they lose charge or stop charging effectively over time.

As batteries age, they struggle with holding a charge. Some vehicles have a battery gauge on the dash and sometimes the needle jumps around.

What is Battery Gauge?

A voltmeter is a tool used to get the reading of how much power is in your battery. The needle may move some while driving, but in reality, the needle shouldn’t move much while driving if everything is working right.

That is why it is a concern when it does jump around while driving.

Why Shouldn’t Battery Gauge Goes Up And Down?

You may be wondering to yourself why the needle shouldn’t move while driving. You may be thinking there is power being taken from the battery by the radio, headlights, and other parts of the car while driving, so shouldn’t that make the needle go down?

Well, this is true that power is being taken from the battery, but power is also being given to the battery while driving. That is the purpose of the alternator.

So, does the needle in the battery gauge jumping around means the battery is bad. No, it actually typically means that you have a problem with your alternator.

Your alternator is responsible for taking extra mechanical power from the engine and turning it into electrical energy to recharge the battery or keep it charged.

The needle jumping means that the battery isn’t getting the same amount of charge consistently.

The reason the needle jumping doesn’t mean that the battery is bad is that if you have a battery not holding a charge that will only cause the needle to not go up as high on the gauge, but it won’t cause the gauge to jump.

What causes the gauge to jump is that the charge of the battery is changing and this can be quickly or slowly depending on the problem with the alternator and if it is cutting out and dying or something else.

The first thing to check

The first thing to check when you have your cars battery gauge jumping around is the serpentine or alternator drive belt. The belt is what connects the engine to the alternator, and if the belt is not working right then, the alternator won’t work right either.

When checking the belt you want to check two things. Those two things are the wear on the belt and also its tightness. If the belt is starting to look old, then that can cause the tension to change while driving.

If you see any visible damage or wear on the belt, then it is a good idea to change it. Changing the belt could solve all your problems with the battery gauge jumping.

If the belt does not look wore out, then the next thing to check is how tight it is. The belt needs tension to be able to transfer the power from the engine to the alternator.

You want to make sure the belt is tight, so all the parts will spin. However, you don’t want to tighten it over because this can make it hard to spin for the opposite reason. Also, having the belt too tight can lead to it breaking or wearing out sooner.

If the belt seems fine and it is the correct tightness, but you are still having issues with the battery gauge jumping, then you will have to test the alternator.

The easiest way to test the alternator at home is to connect a voltmeter to the battery. The battery should read around 14.4 volts with the car running and not fluctuate.

If it is reading less than this, but not changing, then the battery is weak, but the issue isn’t the alternator.

If the reading is jumping, then you will need to have your alternator checked out by a professional because it isn’t working right. It could be as simple as a bad wire or connection, or it could be that your alternator needs replaced.

Before condemning the alternator though, one other thing that can cause the battery gauge to go up and down is if the wires aren’t connected well or are corroded.

It is important to keep your wires clean and connected tightly to the battery. Clean off any corrosion and tighten down any loose wires before replacing the alternator unless you know for sure it is bad.

Bad connections can cause reading spikes, and it is a lot cheaper to clean and tighten wires than to replace the alternator

Now you know though what it means when your battery gauge jumps up and down. You know that it doesn’t mean that the battery is bad, but instead normally means that you have an issue with the alternator.

You should understand better why that is the case and you also know some things to check and ways to fix the problem. You know to check all the wire connections and clean any corrosion.

Your battery is key to driving your car, so you want to make sure it is charging right before you get stranded somewhere and if you notice your battery gauge jumping, then you should have things taken care of right away.

17 comments on “What Does It Mean When Battery Gauge Goes Up And Down?”