Bad Alternator vs Bad Battery - How To Know Which One Is Not Working? 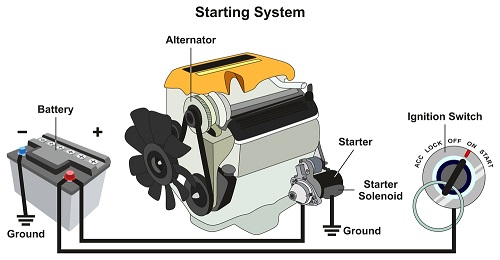 There are a lot of different parts that keep your car running. And it’s not always easy to tell what the problem is when it stops working. If you’re having car issues, its easy to jump to conclusions and assume the worst has happened and that your car will never run again. But instead of going into panic mode, you need to figure out what the problem is. Usually, the issue is with either your alternator or your battery. Bad alternator vs bad battery, how do you tell the difference?

What does the alternator do?

The alternator in your car is in charge of recycling the energy your car battery uses while driving. It not only restores the power that the battery loses, it also powers the engine management, entertainment, climate control, and other systems in your car.

Your car requires a lot of power to run. And thanks to your alternator, your battery is able to be replenished while you driving, which keeps you moving forward. Think of the alternator as being responsible for cycling the power within your engine as you drive. If you didn’t have an alternator to perform this function your car battery would quickly run out of power and the engine would die.

What does the battery do?

Your battery is also another essential part of your car. Without it, you wouldn’t be able to start or keep your car running.

The battery gives your car a jolt of electrical energy when needed to power the electrical components of your car. This is clear when you start your car, if the battery isn’t working then the car won’t start at all.

Car batteries are designed to last about 3 to 5 years, so if you’ve had your car longer than that and haven’t changed the battery it may be a good idea to get your battery checked.

How to know which one is not working? Bad Alternator vs Bad Battery

So now you know what the alternator and the battery do in your car. They are both essential parts that help your car function. But if you’re car isn’t working how do you know which one is the cause? Well, there are a few signs that will help you determine the answer to that.

To tell if it’s a bad battery, first try starting the car. If it won’t start and you hear a low humming noise or clicking sound, this is a good indicator that the battery is the issue. Also, check the battery gauge, even when the car is on but the engine isn’t running the battery should still be powering the lights, windshield wipers, automatic windows, etc.

Another good idea is to get a rag and wipe any corrosion off of your battery. Then try starting your car again. After you’ve done that and the car still won't start try jumping the car. After you let it run for a little while, turn the car off and try to restart it as normal. If it still doesn’t turn on, this means there is an issue with the battery because while the car was running the alternator was able to supply the battery with power. But once it was turned off the battery was no longer working again. It’s normal as batteries age that they retain less charge. After enough time, the battery won't be able to hold enough power to start the car, so it’s time to get a new one.

Now you know how to tell if it’s a bad battery, so how do you tell if it’s a bad alternator? If the previous steps showed that the battery was working, meaning after you jump started your car and turned it off you were able to turn it on again normally, then it’s time to check the alternator. Some signs of a bad alternator are dim lights on your dashboard, your headlights changing brightness as you accelerate and stop, a smell of burning rubber or hot wires, or a growling sound. Also, check your dashboard for a warning light that might indicate an issue with the alternator. But this may not always get trigger or may not be available on older cars. If you see any of these warning signs, it’s a good indicator that the issue is with your alternator and you need to get it checked.

So, what should you do if you have a bad alternator or bad battery?

After you’ve determined where the issue is, you should take it to a mechanic to see what can be done. You will most likely have to replace the faulty part. Depending on your car, the year it was made, and other factors one issue may be more costly to repair than others. Batteries usually cost between $50-$200 depending on what kind of battery you get. Alternators are more expensive, ranging from $400-$1000 and up. So, although the symptoms of a bad battery and bad alternator may be similar, the cost to fix the problem is not.

Now you know what car batteries and car alternators do. They are crucial parts of your engine that keep your car running and in good working order. And now you know how to tell the difference between a bad alternator vs bad battery.

When your car isn’t running right, it’s easy to notice. However, it’s not always as easy to figure out the reason why it’s not running properly. Being able to distinguish the key warning signs of whether or not the issue is with your alternator or your battery will help you figure out what you need to do next to fix your car.

A battery can be a simple, and affordable fix while an accelerator can be a little more costly. But after reading this article you should have all the knowledge you need to be able to tell if its your alternator or your battery that is the problem. And then you can work on getting it fixed from there.