Voltmeter vs Multimeter: What Are The Differences? 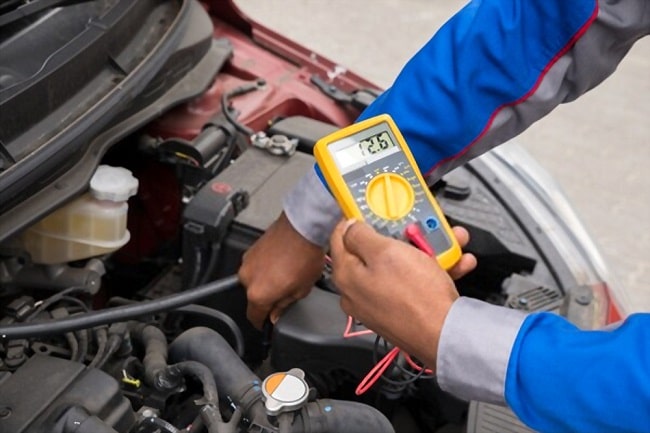 What does each one do exactly though? Well, read on to find out what each device is meant to do and also the differences between the two devices.

We will start out with talking about a voltmeter since it is the more simple of the two. A voltmeter is designed to measure the difference of potential between two nodes in an electric circuit. This is known as voltage.

The way a voltmeter works is that it has a fine wire coil that can carry current. This is connected to the power source with leads with metal tips. Some also have clamps. The fine wire is suspended in an external magnetic field.

When a current is applied this causes a magnetic field in the coil which reacts with the other magnetic field. This causes the coil to route and this rotation moves the needle that gives you the reading.

With modern technology though some higher-end voltmeters are digital. The digital ones work in a similar way, but with the computer inside it is able to turn the electrical reading into a number that appears on the screen.

The digital ones are more accurate because you don't have to worry about something happening to the coil inside the voltmeter or interference with the magnetic field.

The resistors though are a little different and this is where multimeters get their name because they are able to measure multiple things.

Most multimeters can measure voltage, ohms, and ampere. You just use a dial to set it to what you want to measure. With multimeters though there are a lot on the market. (Click to get a best automotive multimeter for your car).

Advanced multimeters can do all kinds of things. The price range can vary, but the advanced ones are nice. They work in a more complex way and are normally digital.

Advanced multimeters can measure all kinds of things from temperature, to humidity, to frequency, and even more. Multimeters are used in all kinds of settings and they even have lab grade ones.

What is the difference between Voltmeter vs Multimeter?

So now you know the basics of a voltmeter and a multimeter. You know how they work on a basic level and what they can do. Here in this section though we will go into even more detail of the differences.

A voltmeter is basically one part of a multimeter. This means that voltmeters are generally cheaper than multimeters. A voltmeter only measures volts where multimeters can measure multiple things.

So as you can see both these tools have their purpose. For most people, a standard voltmeter will probably get the job down for things around the house, but it doesn't hurt to have a cheaper multimeter around just in case.

If you work in science or labs though, then you may use an advanced multimeter. Voltmeters and multimeters really aren't that different. They both work with coils and magnetic fields, but a voltmeter is just one part of a multimeter.