What Does Battery Acid Smell Like? Why Do You Smell? Is It Safe? 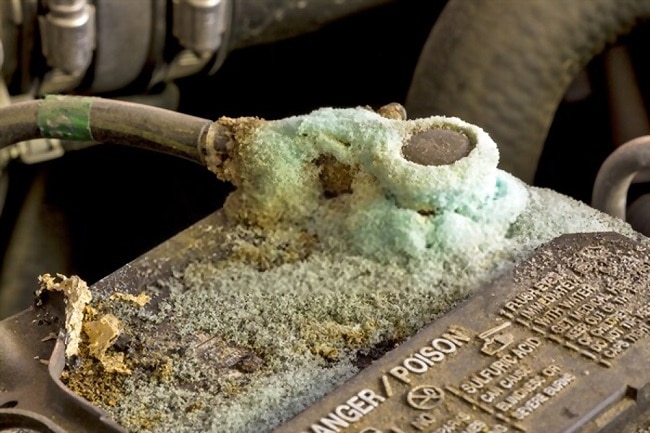 So, you may have an odd smell in your car or garage and not be able to figure out where it is coming from. Well, depending on what that smell, smells like, then it might be coming from your car, mower, or something else battery.

In this article, we will talk about what battery acid smells like and also touch on what it means when you are able to smell the battery acid coming from a battery.

Read on to find out exactly what battery acid smells like and if different types of batteries have different smells.

The first is that you might have had a battery get damaged and crack or bust. This can happen for a variety of reasons. If you drop a battery from high enough, then it might break the case and cause battery acid to come out.

Another reason why a battery might start leaking though is because it has burst. A battery can burst from overcharging or getting too hot. It is most common to happen if you leave a battery connected to a continuous charge.

Overcharging is bad for your battery. A battery tender is smart and will not overcharge the battery. So that is why a battery maintainer is the way to go if you are going to keep the battery on a charger for a long term. Click here to find the good one.

That is why pulse chargers are better to use, and charges that shut off when the battery is full are the best. If you have a damaged battery, then it is important not to use it anymore.

Another reason why you might smell battery acid is if the battery takes to water. For some batteries you have to add water too because it evaporates over time.

These kinds of batteries are not sealed, and you have to open them up and pour water into them to keep the acid mixture correct. If you don’t, then the mixture will become wrong and cause the battery to start to smell like battery acid.

If you start to smell battery acid and have this type of battery, then you will just need to open the battery up, add water, and it should stop smelling and start working right again. It is important to keep water in it so it will work right and not damage the battery.

The last reason why you might smell battery acid from your battery is that the battery just may be bad. As batteries age, they will start to smell like battery acid. This is just something natural that happens as they break down.

If your battery is a sealed one and the case isn’t damaged, but it is smelling, then it just means that it is old and needs to be replaced. If your battery isn’t holding a charge or dying frequently and you smell a funky smell, then it is probably your battery.

So, now that you know what it means when a battery smells like battery acid, you are probably wondering even more what battery acid smells like. Well, depending on the type of battery and the person smelling it, it can smell like a couple of different things.

What do rotten eggs smell like though? Well, if you have been lucky enough never to have to smell rotten eggs, then the closest answer to what it smells like is a boiled egg only worse.

If you don’t know what boiled eggs smell like, then you can make one to get an idea. Rotten eggs and sulfur have a strong and distinct smell and once you smell it once you will recognize it, but if you haven’t smelled it before, then it is hard to describe.

The other most common thing that people say battery acid smells like is vinegar. That is because most battery acid is or has sulfuric acid in it and that has a similar smell to vinegar.

Vinegar has a strong sour smell that can sometimes almost burn the inside of your nose if you have it to close to your nose when you smell it. It has a bitter smell to it.

If you don’t know what vinegar smells like, then you can get some and smell it or just think about how pickles, coleslaw, or other food items with vinegar smell to get an idea and realize that battery acid smells strong than this because it is not diluted by other things.

The last thing we will touch on now that you know that it smells like is if it is safe. You might be worried to remove a damaged battery that smells bad, but really battery acid is not that harmful.

Most are diluted, so it has a PH from 4 to 7. Make sure not to eat or ingest any battery acid, but if it gets on your skin just wash it off, and it won’t hurt you.

It is still important to dispose of batteries properly though, so if yours smells and you are replacing it be sure to dispose of the old one correctly.

So, now you know what battery acid smells like. You know that it normally smells like sulfur or rotten eggs or it can smell like vinegar depending on how your nose works.

You also now know what it means when you can smell the battery acid of your battery and what you should do about it. You know that it is safe to replace the battery yourself even if it smells bad and that you just need to dispose of the old battery correctly.

While battery acid smells bad it isn’t bad for you to inhale, so you don’t have to worry about any health concerns if you walk into your garage and smell these smells.

Just remove the problem and let the garage air out. Now you know what might be causing funky smells in your garage or car that you can’t find and even more importantly you now know what battery acid smells like.