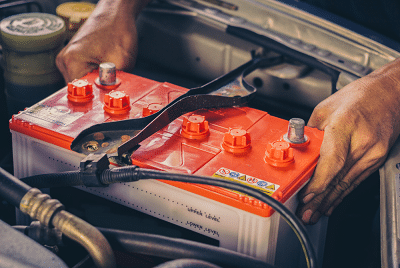 A dead or bad battery is a common reason why a car will not start. A car uses the power from the battery to engage the starter to get the car’s engine to turn over. This takes a lot of power, and a weak or bad battery is not capable of doing this.

Well, to find the answer to this question keep reading and we will go in-depth to the different reason why the car still might not be starting and some solutions for them.

A lot of times to figure out what is wrong with a car that won’t start, a lot depends on the sound that the car makes while you try to start it. If it makes a K-K-K-K type sound, then the chance is the battery is bad or not connected right.

The first thing to check after replacing a battery and the car still not starting is the battery wires. It is more common then you may think that the battery did not get connected right.

The leads could have come loose or not be making good contact. Check them again after replacing the battery and see if they are in fact tightly connected.

The next thing could be that you replaced it with the wrong type of battery or a battery that is not strong enough. If the new battery doesn’t have enough cold cranking amps, then this can prevent it from starting the car.

Recheck the new battery and make sure that it is at least equal in strength to the old battery that you had. If it is, then you can move on to the next stage.

The other thing that could lead to the K-K-K-K sound is a dead battery. The battery may be new, but if you have been driving the car, then it might have got drained, and if the alternator is bad, then it won’t have been getting recharged.

The alternator not working normally triggers lights on your dash, so if you see lights come on, especially the battery one look in the manual and see what they mean.

If you have an alternator that is failing, then it doesn’t matter how new the battery is because it won’t be getting charged as you drive and therefore won’t be able to start the car.

If the sound you get is a Grr-Grr-Grr type noise, then chance are it is not the battery that is the problem causer at all. A growling Grr sound when trying to start the car is an indication that the starter is bad.

If the start is bad, then it will need to be replaced. There are also a few other sounds that come with a bad starter.

The first is no sound at all. If when you turn the key, no sound is made, then it might be a bad starter, but could be a few other things that we will get to later. If you have no sound though, then you can have the starter tested to see if it is bad.

Lastly, if you hear a grinding, clashing, or banging sound while trying to start the car, then it could be an indicator that some of the teeth on the starter are broke.

A sound that sounds like shifting with a bad clutch could mean that the starters drive gear might be damaged, or the flywheel on the vehicle may have damaged teeth.

If you have any clashing, knocking, or metal scraping sounds when trying to start the car, then you need to have it checked out to make sure more damage does not occur.

Another problem when the vehicle doesn’t make a sound when you try to start it could be a bad fuel pump or fuel pump relay. When you turn the key to the on position, you should be able to hear a soft whine of the fuel pump intake turning on.

If you don’t, then the fuel pump motor might be weak or dead. If the fuel pump is just weak, you might be able to tape on the fuel tank near where the pump is at to get the motor going, but this won’t always work if it is to die.

A dead fuel pump will need to be replaced but check the relay first to make sure it wasn’t just a blown a fuse.

Also, make sure you have enough gas in the car for it to be able to start. Sometimes you don’t have enough gas for the fuel pump to suck it up. This can especially happen when parked on an upward slope.

The gas might be in the back of the tank and not going into the fuel pump. One last problem that the fuel system might be having that prevents the car from starting is frozen lines.

If it is cold and water got into the gas system, then the lines can freeze, and this can prevent the fuel from getting to the engine and being able to start.

Talking about the fuel, the problem could also be that it isn’t igniting properly. If you have old spark plugs, then they may not be firing a good enough spark to get the engine to turn over.

Spark plugs usually last for 100,000 miles, so it can be easy to forget to replace them. Check them if the engine is not turning over and making a misfiring type sound.

Also, bad spark plugs will cause the engine not to run smoothly, so before you get to the point where the car won’t start, if you notice rough idling or riding, then check the spark plugs and make sure they are still good.

The last possibility of why a car with a new battery might not start is that the security system got engaged. If the steering wheel will not turn, then the anti-theft system got tripped.

To get the wheel to unlock you need to nudge it some. This will help loosen it from the locking pawl and will allow the car to start.

Another security feature that may keep your car from starting is if it has a proximity key. Make sure the key is in the car or on your person or else the car won’t start. If you are rushed, then you might have forgotten it in the house or left it in your pants or jacket from the night before.

Before freaking out, make sure you have it on you because the problem might be as simple as just not having the proximity key in the car with you.

There is a lot of reason why car still won’t start after replacing battery. The critical thing is to stay calm and work your way thru the problem.

First, make sure the new battery is connected right and is the right one. Then, if your car has a proximity key, make sure it is with you. Next, listen to the sound the car makes when you try to start it.

If it is a K-K-K-K sound, then the battery is weak or not connected. If it is a Grr sound, then it is most likely a bad starter. Clashing sounds can also be the starter or flywheel.

If no sounds happen, then it could be the starter or the fuel pump not working. Depending on the sounds you get, you can have an idea of where to start for checking things so you can get your car running again quickly and without spending too much more money.