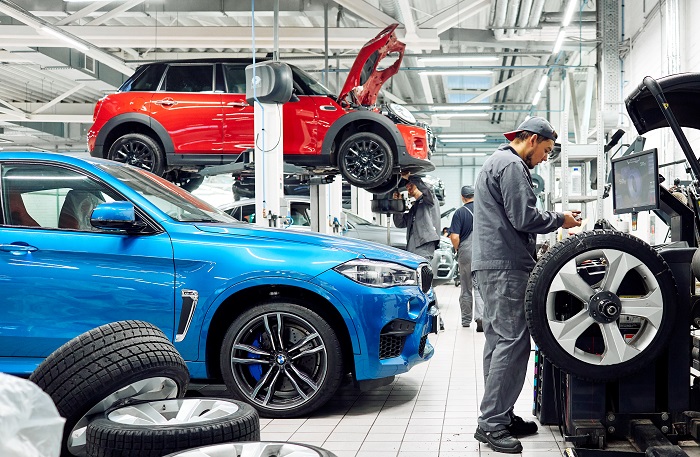 BMW’s are some of the best-known luxury cars in the world. All those features are run by a series of modules and sensors. Unfortunately, like with any vehicle, those sensors and modules do malfunction, and in certain situations, will render your vehicle useless.

Having a dedicated, quality code reader can potentially save you thousands of dollars in repair costs. The check engine light in modern BMW’s can mean a variety of things, ranging from a loose gas cap to a serious engine issue. A dedicated BMW OBD2 scanner has a variety of uses, one of them being reading error codes.

Due to the complexity of today's vehicles, having a dedicated code reader becomes a crucial tool that any mechanic or auto enthusiast should have in their toolbox. A quality BMW OBD2 code reader effectively pays for itself after the first few uses. Quickly knowing where the problem started will save you countless hours and hundreds, if not thousands of dollars.

We have tested several OBD2 scanners made specifically for the Bavarian automaker and chose the top four. Our years of combined experience allowed us to narrow it down, so you don’t have to. Each one has come out on top in its specific category. This article is intended to educate you on the benefits that each specific unit offers.

Out of the four finalists, we have chosen the Foxwell NT510 as the overall winner. Several factors made this code reader reign supreme over the competition. Those include the ability to check all the modules for error codes, the quality overall build of the unit, and an overwhelming number of positive reviews from owners.

Let’s have an in-depth look at each one of the scanners and what made them come on top over the competition. And, trust us, the competition was fierce!

The overall winner title has been awarded to the NT510 Elite Full System BMW Scanner, made by Foxwell for its sheer number of available functions it comes with.

As previously stated, a luxury car such as a BMW will come with many sensors and several modules that control those senors. The chance of failure is greatly increased, especially on older models. This is where the NT510 shines. It can quickly and accurately scan all vehicle systems to determine where the issue is coming from.

Without this feature, finding the problem can take days, literally. Thanks to the NT510, this process is no longer a guessing game. Luckily, this scanner is not just a one-trick pony, as it can perform a variety of other useful tasks such as register a new battery, troubleshoot vital components such as the A/C system, and bleeding of the brake system.

A large, color screen makes reading the codes stunningly easy. The simple, layout of the buttons is another factor that helped it come out on top.

Need to service the transmission or transfer case? No problem. Foxwell has incorporated this feature in the NT510 to add as much functionality as possible for the user. This scanner will become your new best friend when working on your BMW.

Overall, it is the small differences and improvements that all add up to help the NT510 take the best overall title in this battle for BMW specific OBD2 scanners.

Sometimes, you don’t need all the bells and whistles that the other scanners on this list are equipped with. Maybe you just want a device that will clear error codes on your prized BMW without making the process super complicated.

For example, if the airbag has been deployed in the case of an accident, the computer needs to be told that a new one has been installed and everything is back in order.

Also, the C310 can read ABS, DSC, and SRS modules, just to name a few. Due to these being BMW specific modules, A universal code reader may not have that capability.

While the other scanners on this list will have several added features and functionalities, for the beginner or weekend BMW lover, the Creator C310 Plus will do what you need it to for most jobs.

A 2.8” color display lets the user see what is going on with relative ease. Add that to the simplistic layout of the software, and you have yourself a great entry-level scanner.

It will support all BMW’s from 2001 to 2017. So, if your car is in that age range, you are definitely covered. Additionally, a simple 20-pin adapter will allow the scanner to be used with the 1997-2001 models. Therefore, a wide variety of models are compatible.

It goes without saying, but having the right tool for the right job will make everything that much easier. In the case of OBD2 scanners, the Autophix 7810 is a great combination of both value and features. It is ideal for everyone including the weekend warriors to professional BMW mechanics.

Autophix has a great reputation for making reliable, professional equipment for everyone's budget. As you’ll notice, we have two entries from this manufacturer, as they are one of the more popular OBD2 code readers for BMWs.

Much like other scanners on this list, the 7810 can handle all BMW systems (103 in total) allowing you to reset important features such as the oil light or engine service intervals. On top of that, it can be used as a universal code reader, making it perfect for those who work on more than just BMWs.

All models after 2001 are supported as well as most models from 1998 to 2001, so chances are high that your BMW will fall within these categories. If you have an older or brand-new vehicle, the 7810 from Autophix will take care of any issues your car might come across.

An added bonus is that Autophix offers free lifetime software upgrades for the 7810 and many of its other models. You never have to worry about having to pay to have the latest software version.
The scanner is specifically designed for BMW, Mini, and Rolls-Royce cars after 1998 that came with the 16 pin OBD2 connectors. Having the right device will make all the difference when it comes to troubleshooting your vehicle’s problems.

Coming in as one of the most feature-rich BMW scanners, the Autophix 7910 is a dedicated powerhouse. Owners will be blown away at the sheer number of functions this scanner is able to achieve.

Unlike its smaller 7810 brother, the better 7910 has is even more jam-packed with features needed when working on your BMW. It comes with an additional 22 CBS functions that allow you to reset or correct certain values.

The error codes are accompanied by their own, unique definitions, which saves you from having to manually check each one on the internet. Moreover, a multilingual menu makes it ideal for use in many other countries.

The LCD display is full color and measures a total of 2.8” in diameter. This means that you no longer have to squint when looking at the information provided, much like you have to do with other scanners. An intuitive layout makes getting acquainted with the unit that much easier.

Much like other Autophix scanners, the case is made from durable, break-resistant plastic and has black, slip-resistant bumpers for added grip in any working conditions. Like other tools in your toolbox, the 7910 is made to stand up to a lot of abuse without troubles.

Think of it as a specialist doctor, but for your car. You wouldn’t go to a foot doctor for an eye problem, so why use a universal scanner on your BMW. The good news is that the scanner can be used on other cars to scan for trouble codes, but it is intended for BMW-specific modules.

Knowing what to look for when buying a BMW specific scanner can greatly help you in getting a good, quality unit that will last you for years to come. If you are reading this, we are assuming that you are getting ready to purchase a code reader.

This section is dedicated to pointing out some of the most vital features that one should be looking at when buying a new code reader. Not all are made the same and knowing what to look for and what to avoid is information that every potential buyer should be equipped with.

Choosing the right type of scanner

Two major factors should come into play when choosing the right code scanner. While several other elements do play a part, but choosing a vehicle-specific scanner and knowing what it will be used for could make your decision process that much easier.

As previously mentioned, there are multiple universal code readers out there, but getting one that was engineered for BMWs will unlock many features that the automobile crucially relies on.

The second factor is the intended use of the scanner itself. Not all scanners are made the same. Some, such as the Creator C310 Plus will perform basic tasks that only a weekend mechanic will need, while others like the Foxwell NT510 is a top-of-the-line unit is used by professional mechanics.

It is evident that some are intended for basic use, while others are vehicle specific and will do a lot more.

Whilst the software is critical, a robust body will help protect the unit against damages. Therefore, some companies are renowned for having a good quality build, both inside and out.

It can be downright stressful choosing the right manufacturer, but with rigorous research, we have found that well-known brands will often put a bigger emphasis on build quality.

Arguably, the price can be the main factor when deciding factor when choosing a scanner. Not all are made the same and prices will affect that accordingly

That’s not to say that lower-priced units aren’t reliable. Cheaper scanners usually lack a few key features that may not be necessary for some buyers, while others are priced higher due to the added features such as enhanced software capabilities.

In most cases, more expensive means better quality, but that may not always be the case. Thus, looking for scanners in all price ranges and comparing them side by side will always help get you the best deal.

Does It Do What I Need It To Do?

Functionality is another characteristic that will likely influence one’s final choice. Some scanners claim to be BMW-specific but are nothing more than a glorified universal scanner.

Knowing what you want to do with the scanner and the systems you need access to will help in determining what scanner is best suited for your application.

If you just need something to scan error codes with, almost any universal scanner will be able to do that job. But if accessing certain modules specific to BMW, you need a dedicated OBD2 Scanner. For example, if someone needs to do an active test, a regular run-of-the-mill scanner can become a literal brick.

There is no doubt that having an OBD2 scanner made specifically for the BMW platform is required if deciding to do any specific jobs on the vehicle. Knowing which one to pick and what they each do is going to help you choose that much easier.

We hope this article has brought you up to speed on what BMW-specific scanners and what their advantages are compared to other universal scanners. Through our intense testing and research, we have found that the Foxwell NT510 is a clear winner.

It is engineered to tackle almost any BMW-related issue that may arise, and the overall build quality has made the NT510 come out victorious over its competition.

If you have any further questions about OBD2 scanners or anything else mentioned in this article, please do not hesitate to contact us. A link to every product is provided below.