How To Bleed Air From ABS Module? 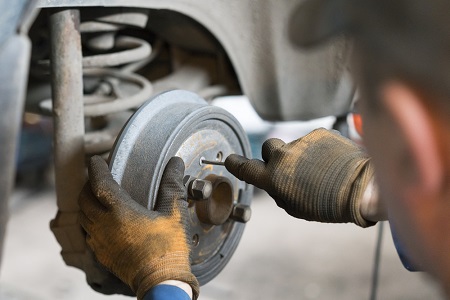 This can be dangerous because it means that it will take longer to stop. Most of the time bleeding brakes isn’t too hard, but what if air gets in the ABS Module. Well, bleeding the ABS module can be a bit more of a challenge, but this article will explain how to do it.

How to bleed brakes?

The way you bleed air out of the brake system is by opening the bleeder valves at the proper time. You want to make sure you have clean fluid ready first though before bleeding the lines however you want to open all the bleeder valves and let them drain. You also want to suck out all the old fluid from the master cylinder. Once the master cylinder is empty, you can add in new fluid. To get the rest of the old fluid in the air out though you will need a partner to make it easier.

You put the hose that you are bleeding into some fresh brake fluid. Then you have your helper depress the brake pedal with enough force to stop at a light. After they depress the brake you loosen the bleeding valve a quarter turn. This will suck new fluid in and cause some old fluid to come out once old fluid stops coming out close the bleeder and have the person lift their foot off the brake. You repeat this process until fresh, clean fluid comes from the system.

Depending on the vehicle you will want to start with a certain brake line either the front or the back. This is due to how the system is set up, and there is the most efficient way to bleed the system. You will have to look up the information depending on the make, model, and year of your car. If bleeding the brake system like this though doesn’t fix the problem of mushy brakes though or you know the ABS module has air in it, then you will have to bleed it.

Bleeding the ABS module is more of a challenge than just bleeding the brake system because the ABS module has a lot of chambers and moving parts in it. Most ABS modules do have bleeding valves, but a lot of times these aren’t enough to get all the air out. Depending on where the air is trapped though will determine how hard it is to bleed the ABS module.

The first thing to do to bleed the ABS module is to start the car or turn the key to where the battery is on. Then you need to depress the brake pedal.

It is important the system is under pressure before doing this to help force the air out. After the brake pedal is depressed to loosen the brake sensor.

This will cause lights to come on the dash which is what is supposed to happen. After you loosen it to keep the brake depressed and tighten it back. This should allow the air out and cause the lights to go off.

If the air is trapped farther in the system though you will need a special tool to get the air out, different vehicles require different dealer tools that plug into the OBD2 port. Some OBD2 scanners can do the same thing.

The tool cycles the different valves while the brakes are under pressure to help allow air to come out. Then the new brake fluid can go in which in turn forces more air out.

After using a tool to cycle the valves, you will then need to bleed the brake lines again manually. That is because most of the air out of the ABS module is going to go into them.

Can you do it at home?

So, this leads to the question of can you bleed the ABS module at home? Well, the answer is yes you technically can, but it is hard.

That is because the special tool that is required is expensive. You can buy one and like has been mentioned the top of the line OBD2 scanners can also normally do what is required, but it is costly.

Also, it is hard to do at home because in order to get to the bleeding valves on the ABS module you will normally need the car in the air.

This is because it can be a tight squeeze to get a wrench to it. It can even be a challenge to manually bleed the rest of the brake system at home for the same reason.

Sometimes ramps are enough to allow you to get to what you need to, but space can be a challenge bleeding brakes at home without the car in the air.

So, now you know how to bleed the ABS module yourself at home, however, you also now know that it is a hard task to do at home. That is because it can be hard to reach the bleeder valves with the car on the ground and also that it takes a special tool to cycle the valves in the ABS module to let the air out. You also know that before bleeding the ABS module that you should bleed the rest of the brakes to just make sure the air isn’t in them and also to bleed the rest of the brakes after bleeding the ABS module since air from the module will go into them. If you can get the equipment to bleed your brakes and the ABS module at home, then you can do it to save money, however, if you don’t work on cars a lot you might just want to let a shop bleed your ABS module since it requires a special tool. Now you know all you need to know though so you can make the best decision you can when it comes to bleeding your brakes the next time you get air in them.

6 comments on “How To Bleed Air From ABS Module?”