Why Is My ABS And Traction Control Light On? What Should You Do? 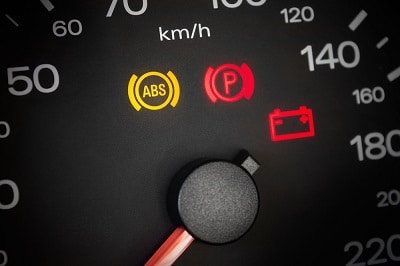 Today's modern cars have been equipped with an anti-lock braking system, or ABS for short. This feature has proven to be a crucial piece of safety equipment in cars by helping reduce the braking distance and provide added traction in low-grip situations.

Because the ABS and traction control systems are one module and use the same sensors, if one fails, the other will likely cease as well.

This article will help you understand what the ABS system does, how it operates, what may cause it to fail, as well as answer a host of other ABS related questions.

What is an ABS system and how does it operate?

If your wheels lock-up under hard braking conditions, your stopping distance is greatly increased. The ABS system takes notice of that and releases the brakes in a sort of “pulsing” fashion to decrease the overall braking distance.

How does the traction control system work?

Alternatively, if accelerating in slippery conditions, chances are the vehicle will break traction with the road. In the event of that happening, the traction control system kicks in by reducing the engine's power to help the driver regain grip.

Wheelspin sensors measure the rate at which the wheel spins which is then relayed to the ABS/Traction Control module. If one wheel is spinning faster than any of the rest, the car will then cut power to the engine until traction is regained.

A defective sensor will likely disable the system and the driver will be left up to their own to try and regain traction. Common indications of a defective wheel speed sensor are excessive wheel spin when taking off from a standstill.

As you might have guessed, the steering angle sensor is responsible for measuring the angle of the steering wheel. Another job the sensor has is to track the speed at which the wheel is turned.

For the traction control system to work correctly, the vehicle must know where the driver is intending to go. If this sensor fails, the car effectively is left without traction control, but be careful as this issue might also be disguised as a bad clock spring.

In rare cases, the module controlling the ABS/Traction control may fail, leaving you, the driver, without any traction control or anti-lock brake aids. While this might sound extreme, it is not so bad if the road conditions are dry.

As you might have guessed, the ABS/Traction Control module takes the incoming signals from the sensors and decides when to intervene. Think of it as a second pair of eyes that is ready to help out at any moment.

Sometimes, one or several of the sensors get overran with so much information they will essentially freeze up. This will trigger the warning light on your dash and the ABS/Traction Control features will no longer work.

This issue is encountered quite often, many times after having work done around the wheels. It’s good to keep in mind that this is not always the case.

If no recent wheel work has been performed, it may be possible that the connections have simply worked themselves loose over the years. In worst-case scenarios, the wires leading to the sensors can get severed due to excessive rubbing.

A wheelspin sensor can become easily damaged due to them being exposed to the elements over the years. Usually, they are located on the brake assembly of the vehicle and can be easily replaced.

To replace the sensor, you must first locate it and the easiest way to do that is by removing the wheel. After it is located, simply disconnect the wiring going to it and replace it with a new one.

The location of a steering angle sensor varies on each vehicle. It can be located behind the steering wheel, close to the steering box, or near the wheels, just like the wheel speed sensor.

Depending on where it is located will determine the difficulty of replacing the sensor. A simple Google search will tell you exactly where it on your car. Replacing it can be as simple as unplugging the old one and plugging a new one in. It is important to know that sometimes the sensor may just need recalibration.

On most vehicles, the ABS/Traction Control module is located under the hood next to the brake fluid reservoir. It is easy to spot thanks to its large, square size and several hard brake lines that lead to it.

Replacing the module itself should be a last resort, as it can be quite difficult and expensive to replace. Be sure you have the proper tools and knowledge before attempting this job. If the new module matches up to the old one, simply take off all connections from the old one and install the new unit in place. Once done, a brake bleed operation must be performed to ensure there are no air bubbles in the system.

Often, the wires leading into a sensor may have come loose, thus not making proper contact with the sensor. This issue can be resolved by making sure the connector is set securely in place.

To save you some time, scanning the car for faults with an OBD2 code reader such as this one is recommended as this will point you in the right direction.

While most automotive manufacturers use specific fault codes for their vehicles, they are sometimes interchangeable between most models. For example, codes ranging between C0031-C003E mean that one of the speed sensors is malfunctioning on a Ford/Lincoln.

Similarly, a wheel speed sensor on most Toyota models will be P0500.

Having your Traction Control/ABS light turn on can be the cause of several problems, some requiring little just a simple restart, while others can take up a lot of time and money.

The best way to figure out why the warning light has been turned on in the first place is to scan the vehicle for fault codes. After all, no one wants to replace a part that isn’t broken.

We hope that this article helped shed some light on why the ABS/Traction Control light is on in your car and be sure to check out our other articles to help you with our other car-related issues!

59 comments on “Why Is My ABS And Traction Control Light On? What Should You Do?”