What Is An Agm Battery And Who Should You It? 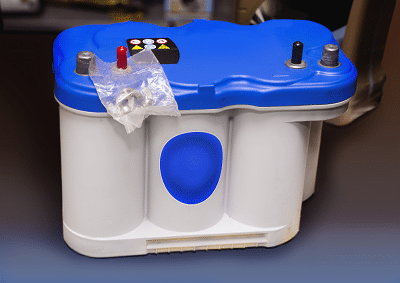 There are all kinds of batteries available on the market. This can make it really confusing when shopping for a new one for your car, mower, or anything else that uses one. You might see batteries called AGM, Flooded, or Gel and not know the difference.

All the types of batteries that we have mentioned are lead acid batteries. This means that they work in relatively the same way. In a lead acid battery you have plates, lead, and lead oxide along with some other elements to change things such as density and hardness.

Inside the battery is a liquid solution that is 35% sulfuric acid and 65% water. This mixture is called electrolyte and it produces a chemical reaction that creates electrons. These electrons are how the battery provides power.

When you measure the charge of the battery you are seeing how much sulfuric acid is left in the water mixture. If it is low then that means that the acid is resting on the plates.

When you charge the battery it breaks the acid off the plates and causes it to return to the solution. This is what gives the battery its charge back.

There are actually two types of lead acid batteries and the mentioned categories are sub types. The type of battery affects the sub type some, so that is why I am going to give a brief explanation here. You have starting batteries and deep cycle batteries. They are both designed to do two different things.

The starting battery is designed to give a short but strong charge to help start something. To get an engine to turn over it takes a lot of power all at once.

The way that cranking or starting batteries accomplish this is by having more plates inside them. The plates are what the charge passes thru and helps strengthen the charge.

Deep cycle batteries on the other hand are designed to stay charged longer and distribute a weaker charge but for a longer period. These are the ones that recharge better because how they are designed.

On a deep cycle battery there are not as many plates, but the plates inside of the battery are thicker. By being thicker it takes the electrons longer to travel thru them making the charge last longer, but not be all at once.

What Is An Agm Battery?

Now we can get into what an AGM battery actually is. AGM stands for Absorbed Glass Matt. They have thin glass mats inside of them that suspense the electrolyte close to the plates. The mats are only wet enough to hold the liquid, but there is not excess liquid inside.

This makes them spill proof and safe. Since the electrolyte is held close to the plates it helps with faster discharge and recharge. This means that since they can deliver a fast charge if need, then they can be used as starter batteries, but since they hold a charge good as well, then they can be deep cycle batteries.

AGM batteries are also easy to take care of. You don’t have to do anything special to them. If they are not going to be used for a while, then it is a good idea to put them on a charger, but they don’t have to have any other maintenance done to them.

Also, since they are only filled with enough liquid to wet the mats inside, they weigh less than most other battery. Another positive of AGM batteries is that they don’t build sulfur as much.

Who is AGM Battery for

So what can AGM batteries be used for? Well, the answer is anything. It has already been mentioned that they last a long time and since they don’t have sulfur build up on the plates they make good deep cycle batteries.

One that is designed for starting will just have multiple thinner plates inside of it and more matts to go between the plates.

AGM batteries are used in cars, motorcycles, boats, and most other things that require a battery. You can get them in most mid sizes and the typical size ranges from 30 amp hours to 100 amp hours.

This means that no matter what you need a battery for you can get an AGM one for it. AGM batteries do cost more than other types, but the extra cost is worth it.

So now your battery knowledge is expanded and you should have a better understanding of what is an AGM battery and how it works. You know that it stands for absorbed glass matt and that is because there are thin glass matts inside that hold the electrolyte.

Now, you should be able to know if an AGM battery is right for your needs and then go out and find one that works for you if it is.