What Is The Truth About Seafoam? 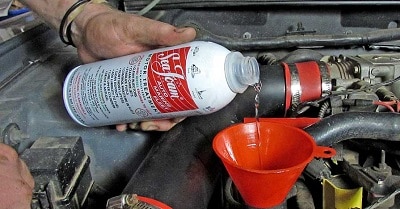 Engine additives and fuel additives come in a variety of different forms. They all, however, are supposed to do the same thing, and that is to clean the engine out and help it burn the fuel better.

One of the most common additives out there is Seafoam. In this article we are going to look at what Seafoam is, what it does, and also learn the truth about it.

Read on to learn everything you want to know about Seafoam and have all your questions answered on if you should use the stuff or not.

Before going into if you should use Seafoam or the effects of Seafoam, we will first cover what it is and also what engine additives in general are.

Seafoam is an engine additive that is used to clean out the engine. You can mix it into the fuel in your fuel tank, or some people put it into the oil.

It is a chemical that is supposed to help break down gunk and sludge inside your engine and other parts of the car. It is also supposed to help the fuel burn better cleaner to prevent more buildup from occurring.

What does it do?

When you add Seafoam into the engine or oil, it will cause a lot of white smoke to come out of the engine and out of your vehicle. Some people say that this is the carbon burning off of this, but others will say that this is just the Seafoam burning.

When to use it?

So, now that you know what it is and what it does the big question is when you should use it. Depending on who you ask the answer will vary, some never say, while others say all the time. Some will give the in-between answer of if you start to have knocked.

The people that say never use it say this because there is no proof that it works and a lot of them probably have experiences of the Seafoam causing more harm than good.

The ones that say to use it all the time have probably had their vehicle start to run better after using it, and they are giving the Seafoam credit when there is no proof.

The last group that says when there is knocking are saying this because they know there is an issue and the Seafoam might fix it and if it does, then great, but if it doesn’t then you aren’t out much.

Which group is right?

So, that brings up the question of which group is right and the answer to this is it is hard to say.

There is no proof that Seafoam really helps reduce carbon in the engine and other lines, but some people swear by the stuff, and they do so because they have had good luck with.

Others have had bad luck though and blame the Seafoam for clogging things like the catalytic converter or blame it for gumming up the O2 sensor.

They say it causes the carbon to break off parts that it is attached too and instead of it burning off it just clogs things and attaches to something else.

Again though, there is no proof indeed that it is from using the Seafoam that you had these issues and they might have been going to happen anyways.

Should you use it?

So, you may be wondering should you use Seafoam, and the answer is it depends on if the risk is worth the potential reward to you.

There are a lot of different fuel additives that are supposed to help burn off carbon and remove impurities from the gas, and it really is up to you if Seafoam is the one you want to use or not.

If your vehicle is already running poorly, then using Seafoam and getting lucky and having your vehicle run right again might be worth the risk of using it.

However, if your vehicle runs great already, then using it and risking it having something go wrong might make you decide not to use it.

A lot of people feel that fuel additives are just snake oil and don’t really work. A lot of car people think that if you use the good gas in your car and do regularly maintained like changing oil and the filters, then you don’t need fuel additives.

Others think that additives help make your car run better and more consistently. There really is no right side, and you just have to form an opinion on your own based on your risk tolerance.

So, the truth about Seafoam is that it is a fuel additive. That is the only thing that is completely true. The rest is based on opinion or untestable marketing.

Seafoam is supposed to remove carbon deposits, but there is no way to know if it really works or not. Some say the stuff is great while others say it will gunk up your vehicle.

Some people think you don’t need any fuel additives while others think they help the vehicle run better and longer. The truth is, you have to test them yourself and see if you notice any results or not.

The truth about Seafoam is you have to make your own opinion on it and find the truth yourself.