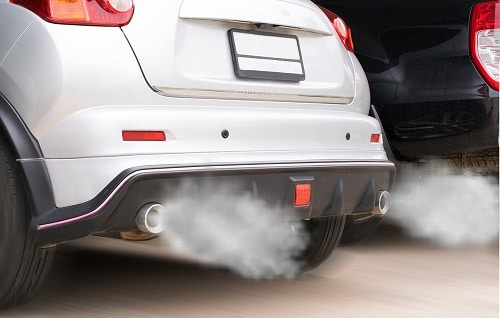 The main component in your car is the engine. This is where the fuel is burnt, and power is created to move the car.

Well, the fuel that is burnt leads to smoke being formed and this is called exhaust. The smoke comes out of the tailpipe at the end of your vehicle.

Sometimes you can’t see the exhaust because it is nearly colorless or not much, but other times the exhaust is thick and noticeable.

The color of your exhaust can vary and means different things.

In this article, we will look at the different colors that your exhaust can be and the meaning behind each one. Read on to learn all you need to know about the exhaust coming from your vehicle.

The exhaust coming from your car can tell you a lot about how your car is running. Before getting into the details of what each color of smoke means though we will briefly touch on how the exhaust system works. The exhaust system starts at the engine where the fuel is burnt in the cylinders.

Before exiting the car thru the tailpipe through the gases pass thru the catalytic converter. This removes any unburnt fuel from the exhaust. After that, the exhaust fumes are clean and should exit colorless if things are running correctly. If your vehicle is not running correctly, however, then the smoke could be Black, White, Gray, or Blue color.

Continue reading to find out what the meaning is behind each color of smoke.

The first color of exhaust that we will look at is black smoke.

The meaning of black smoke is that the air-fuel mixture in the engine is too rich. In other terms, this means that there is more gas than air which means that not all the gas is being burnt and too much fuel is leftover in the exhaust for the catalytic converter to remove it all causing black smoke or soot to come out of your exhaust. There are a few problems that could be going on if you have a black exhaust.

Fuel return lines that are restricted can also lead to this problem. The way to fix it is to make sure that the lines are clear and then replace the fuel pressure regulator. If that was the problem, then your exhaust should be cleaner after doing these things.

Another thing that could lead to black exhaust is a leaking fuel injector. This is because if the fuel injector is leaking, then it could allow too much fuel to get into the cylinders and again lead to too rich of a fuel mixture.

To fix this, you will have to check and test all the injectors and see if any are leaking. The last issue it could be is a bad sensor. If you have a sensor that is giving a faulty reading, then it could be telling the car to release more fuel than what is needed. To make sure it isn’t a sensor issue you will have to test all of them and if you have a bad one have it replaced.

The only normal color smoke is white smoke, and this is especially true when you first start your car or if it is cold outside. That is because condensation can form in the exhaust system and then it will come out as white smoke. Too much white smoke or white smoke after your car has been running while is a problem, however.

White smoke means that you most likely have coolant leaking into the engine combustion chamber. This is a major problem and can be a sign of bad things about to happen. If you have a lot of white smoke, you need to have your vehicle looked at right away because it could mean you have one of these problems.

The first possible problem we will talk about is a leaking or blown head gasket. The head gasket is the gasket between the engine block and cylinder heads. It keeps the fuel in the chambers and the coolant and oil out of the chambers.

If it is leaking or blown, then coolant can get into the combustion chamber leading to white smoke and a possible sweet smell while also causing your engine to overheat. To fix it you will need your head gasket replaced which can be costly, so make sure the vehicle is worth it before having the repair done.

The other possible reason for white smoke is that you might have a cracked cylinder head or a cracked engine block. Both of these are similar in that it is allowing coolant to get into the combustion chamber thru a crack.

If the cylinder head is cracked or warped, then it will need to be remolded or replaced. If the engine block is damaged, then you will need a whole new engine. Both of these things are costly, so again it is important to make sure the vehicle is worth repairing. Since all the things that can come from white smoke are bad, it is very important to pay attention to if you have white exhaust or not because if you do you will problem end up break down if it is not taken care of quickly.

There are a lot of possible causes for gray smoke. One of the common ones is that oil might be burning, but that can also lead to blue smoke which we will cover next.

A bad turbocharge can be the cause for this, but if you don’t have a turbocharger, then it is likely something else. Another reason for gray smoke is burning transmission fluid.

Another cause of the gray smoke is that you might have a bad or stuck PCV valve. The positive crankcase ventilation valve is responsible for cycling bad emissions back into the combustion chamber to be burnt again. If the valve is not working, then these emissions can come out of the exhaust as gray smoke. Also, the pressure can build in the valve leading to oil getting into the engine and burning.

Like with gray smoke blue smoke can be an oil burning problem as well. Blue smoke can come if you have bad piston rings. The piston rings keep the oil from the lubricated parts from getting into the cylinders. If they are bad or leaking, then oil can get thru, and this will cause it to burn. Burning oil also has a very distinct smell, so if you notice the smell with blue smoke, then it is defiantly oil burning from somewhere.

Like was said with gray smoke the turbocharger might also need repairs. If you have a blue smoke and don’t have burning oil, then the blower on the turbocharger probably needs to be replaced. This is a simple fix.

If your car is burning oil but is old, just make sure to top the oil off regularly, but it probably isn’t worth doing expensive repairs. If it is a newer car though and is burning oil, then you might want to consider fixing it.

After reading this, you now know all the different kinds of smoke that can come from your exhaust. You know the different colors that smoke can be with black, white, gray, and blue and what each mean.

You know blue smoke is burning oil, gray smoke is burning transmission fluid, white smoke is burning coolant, and black smoke is too much fuel. Now that you know these things you can pay attention to the color of your exhaust and know where to start looking for problems if you notice any of these colors smoke coming from your car's exhaust.

You also know the basic on how to fix each problem, so the next time you have noticeable exhaust coming from your car, you won’t be left wondering what it means.