Why Manual Transmission Won't Go Into Gear When Running And What To Do? 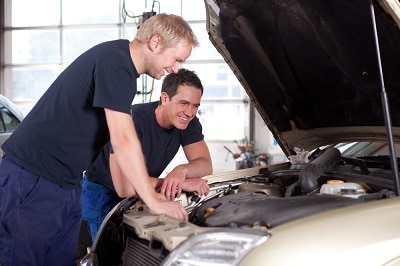 Well, this can be a frustrating position to be in if you are ever faced with it. A car won't go anywhere in the park. In order to drive you have to shift it into first gear, but what if it won't go into first gear.

The first thing that is pretty common to cause your car not to be able to go into gear while running is being parked on an incline.

If you are parked on a hill, especially a steep one, then the car might not be able to go into gear because there is too much pressure on the park pawl. This pressure can cause it so it can't move out of the way when you try to put it in gear.

Some pressure is good and needed though because that is what keeps your car from rolling down the hill while parked.

This problem is pretty easy to fix though if it is a problem you are having. All you have to do is roll the car a little. You shouldn't have to move it much to get the park pawl to loosen up. Then you can put your car into gear like normal and be able to go about your day.

When moving the car, you can turn it off and sometimes you might be able to put it in gear with it off. If that is the case, then it will be even easier to roll your car a little to remove the pressure on the park pawl. If you are parked on a hill, then this is the first thing you should try.

The next thing that is the most common reason why a manual won't go into gear while running is issues with the clutch.

The clutch is the pedal on the floor that you have to press to shift. When you press it, it loosens the pressure plate and clutch disk. Then these move out of the way it allows the new gear to drop into place when shifting. If these are stuck or won't move, then you won't be able to put your car into gear.

The first thing that could cause the plate or disk not to move is if your clutch became disconnected. If the clutch wire broke, then it will not send the signal to the disk to move.

If the wire is not broken, then the clutch disk or pressure plate might just be worn out. The only way to know if they are worn out though is by dismantling the system and checking them.

Another thing that you can do though before dismantling is making sure you have enough transmission fluid and also the right type. Also, if you have resent flushed the fluid, then that might be why the plates aren't moving.

The fluid gets pieces of metal in it over time, and sometimes it is these pieces of metal that are making contact with the plat to get it to move. If that is the problem, then things will need to be replaced. If the fluid is low though, then topping it off can help give it the fluid it needs to lubricate the pressure plate or clutch disk to help it move.

10 comments on “Why Manual Transmission Won't Go Into Gear When Running And What To Do?”