How To Find Ground Fault With A Multimeter? 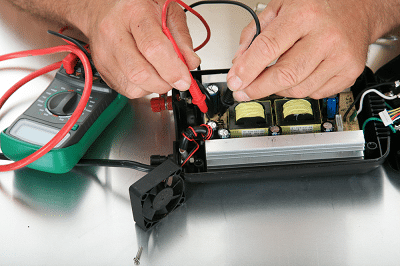 Multimeters can be used for all kinds of purposes. One of those is locating a ground fault in a circuit. After reading this article you will know what a ground fault is, why it is bad, and how to use a multimeter to find one.

We will go thru the steps required to safely find a ground fault so it can be fixed and not cause harm.

A ground fault is when wiring is worn, chafed, pinched, or bad and current is getting out of the system and into the ground.

The reason why ground faults are dangerous is that if current is getting out it means something is damaged in the system. The thing might still function properly, or it could not have enough power going thru the circuit and the item might not function right.

Ground faults are also dangerous because if you are working on the item that has a fault and touch the part where the fault is, then the current can go thru you.

This will only happen if the thing is on though, so if working on something make sure it is off. You may touch the bad wire though unknowingly with normal use and get shocked. Even worse, depending on what the bad wire touches it could cause a fire or worse shock.

If the wire with the ground fault touches water, then it can shock everything in the water. This is why you need to find ground faults as soon as possible, if you suspect one.

Any multimeter will work for finding a ground fault. You don't need the most expensive one on the market and there are a lot of different ones on the market.

All you need is a multimeter that is reliable. Make sure the object that you are going to be testing is unplugged and off. Then also make sure that the probes are connected to the multimeter.

After you have the multimeter on and set up, it is time to do the ground fault test. Touch one probe to a terminal and touch the other to the device housing or mounting bracket.

Now, you move the first prob that is touching a terminal to another terminal. If the multimeter reads anything besides infinity during any part of the test, then there is a ground fault.

If you are testing something with multiple circuits, then you can use the multimeter to determine which circuit is bad as well.

If for example you have a battery that is connected to a fuse, then you can connect on probe to the battery side and then one to the fuse side. Start turning off fuses unitil the reading is correct or the infinity symbol and then you will know which fuse is bad.

The thing about finding ground faults in a circuit that can be annoying is figuring out which one it is, but it really isn't that hard. You just have to test each on until you find the bad one.

This requires being patient and taking your time. If you stay patient and take your time though, then you can find which circuit is bad and know which one to repair, instead of having to fix them all.

The best way to fix a ground fault is just to replace the bad wire. This is the simplistic type of ground fault to fix. If it is just one wire or a few wires that are bad or old, then you can remove them and put new ones in.

Sometimes though the ground fault is in a specific part. If that is the case, then you have to replace that whole part. It is normally not worth the trouble or safe to fix the part instead of replacing it.

Also, you should never use a part with a ground fault for the danger or damage that it can cause. Just order the new part and replace the whole thing, to fix the ground fault problem.

Ground faults tend to not be hard to fix, but they can be a real struggle finding sometimes especially depending on how big the system or circuit is.

The trick to finding the ground fault though, is breaking the system down into smaller sections where you can and using patients and going slow when you can't break it down.

Then you just need a simple multimeter that is reliable to start testing. To test for a ground fault connect one probe to a terminal and the other to the case of the object and then move the first probe from terminal to terminal.

If the multimeter on the ohm setting gives any reading besides infinity, then there is a ground fault. If the system has breakers, then you can connect on probe to the terminal and the other to the breaker.

You can then shut the breakers off, until you find the one that is causing the bad reading. That way you know which part of the system you have to work on.

Once the ground fault is located, then it is easy to fix. You just have to replace the worn or pinched wires with new ones and the problem should be solved. Sometimes though it is a whole part that is bad and you will have to replace it. Grounds faults are dangerous though and should be taken serious. They should be found and repaired as soon as you are aware of one existing.