How Many Volts Is A Motorcycle Battery? 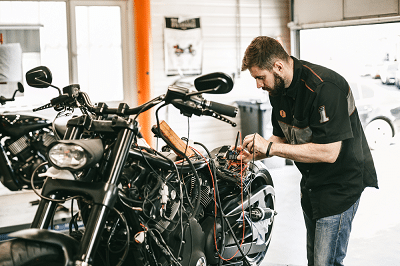 You may know that different types of batteries have different charges or volts to them. This is because they need a different amount of power to operate.

For example, your TV remote doesn't need a lot of power, so it doesn't use many volts. This means that a TV remote would have fewer volts in it than a car battery.

In this article though we will look at how many volts are in a motorcycle. Is it the same as a car battery or less? Well, once you are done the reading, you will know how many volts is a motorcycle battery and also anything else related to this that you might need to know.

Are Car And Motorcycle Batteries The Same?

Well, I am not going to waste your time here. We are going to get right into answering some questions. The first one we will look at is are a car and motorcycle batteries the same voltage? The answer to this is it depends.

Pretty much all car batteries have a voltage of 12.6 when fully charged. They are called 12-volt batteries though. The charge can jump to a range of 13.6-14.6 volts when the car is running. That is because the alternator is feeding the battery charge and it isn't being drawn that fast.

The reason why it depends is depending on the type of motorcycle you have will determine the type of battery that is in it. Some bigger motorcycles might use standard car batteries or at least they use 12-volt batteries.

Think of your Harley Davidson and chopper-type motorcycles. These bigger rides do use 12-volt batteries, so they are the same as a car battery. This means that you can charge them using something that is designed to charge a car. Some motorcycles don't have this size battery though.

What Size Do They Have?

If they don't have 12-volt batteries, then what size do they have? Well, some smaller motorcycles and especially scooters have 6-volt batteries. This is because they don't use as much power when driving.

Also, by having a smaller battery on the vehicle, it cuts down on weight which can help on speed. Small things such as crotch rockets you want to be lit so they can go fast. These little rides have smaller batteries to help with this.

Why Is The Voltage Higher Then What Says?

The next question you might have now that you know the voltage of the different types of batteries is why is the voltage higher then what the battery says?

Most batteries for cars and motorcycles are lead-acid batteries. This means that they have a lead-acid mixture inside of them that holds the charge. The electrons move thru this and into the different parts of the car.

This is a really simple explanation but gets the job done. The electrons are broken into compartments called cells. Each cell in a battery holds 2.1 Volts. This can still range some, however.

Since the electrons are moving from cell to cell and then into the parts of the car, when you turn the motorcycle off, one cell might end up with more electrons than a neighbor.  This is why if you measure the volts of each cell, they will be different.

One cell may not last as long as another cell either. This means you might end up with a cell that can only hold 1.5 volts while the rest are holding 2.1 and the reading would still be close to the proper amount of 12 or 6 volts.

The loss of the ability to hold the charge can come from a variety of reasons, but the main one is sulfur build up. I am not going to go into a lot of detail about why a battery might not hold a charge though because there are many reasons, and that is a whole different article.

So, now you know the charge is broken into cells. For a 12 volt battery there are six cells, and for a 6-volt battery, there are only three cells. This helps explain why the 6-volt batteries are smaller. They have half the amount of cells in them than a 12-volt battery.

The cells are held in place with a plastic enclosure. This enclosure is the main part of the battery you see, and the two end cells have diodes that pop out of the top of the case that is your positive and negative leads.

Is One Type Of Battery Better?

The last question we will look at is if one type of battery is better or not. This means should you try to buy a motorcycle with a 12-volt battery or get one with a 6 volt or does it matter.

The answer is it doesn't matter really a battery. Both 12-volt batteries and 6 volts do what they are supposed to do. They are relatively the same, and the only thing different is the number of cells. They will still drain the same way and still age the same way.

Also, the same things that might cause one to not last as long will affect the other. This means that you shouldn't make your motorcycle purchasing decision just based on the size battery it uses. Buy the motorcycle that makes you happy and doesn't worry about the size of the battery.

This is because the battery is smaller and they don't need as much power. You also know how a battery works now and that they all drain the same way. When buying a battery just take the old one with you, so you make sure you are getting the right voltage for your ride.