How Many Amps Is A Car Battery? 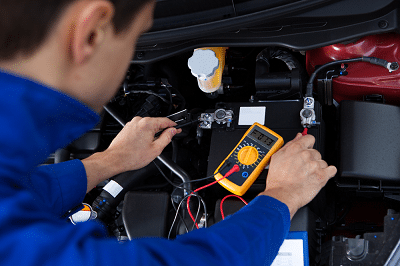 This article will look at how many amps are in a car battery.

It highly depends on the battery, each battery should have a rating, some batteries can deliver a very high current, c. 1000 amps for short periods. Batteries are more commonly measured in Ah (amp hours).

So, we are going to be focusing on amp hours and not cold cranking amps in this article.

After reading this, you should be able to figure out how many amps is a car battery.

The easiest way to figure out how many amps our car battery is is by just looking at the tags on it.

Car batteries can range from 40 amps to as high as the low hundreds, so there is not one set amount of amps in a 12volt car battery.

Most batteries, however, don't have wrote on them how many amps they are. This can make it hard to figure out how many amps your battery has. One rule of thumb is the bigger the vehicle, the more amps the battery has.

Since your battery probably doesn't have wrote on it how many amps it is, then you might have to use a chart and get an estimate. The battery will have written on it the class of battery it is, and this will help you figure out the amps.

Once you know the class you can look up battery amp charts and see a close estimate of how many amps your particular battery has.

Another more scientific way to find out the amps of your battery is by using a resistor. You hook this up to the battery, and it applies a draw on the battery.

You want to make sure your battery is fully charged when you start to get the most accurate estimate. The resistor should be 1ohm, 200watts.

After connecting the resistor, you will want to check it every hour or so and see how long it takes the battery to drop from 12.6 volts to 12 volts. This is about a 50% drop in power.

This test should be done at around 77 degrees because if it is warmer or colder, it will affect the discharge of the battery. Also, the voltage should drop around .1 volt every two hours or so.

If it is dropping faster or slower than that, then you might be using too much or too little voltage to get an accurate estimate.

If you know the amps your battery is supposed to be and want to see how many your battery has in it, then you can use a voltmeter. You do this by taking your voltmeter and connect it to the battery.

Some nicer volt meters have clips that hook right on to the battery. Others though have metal rods that you have to hold on to the battery post. For these you might need two people, but probably not.

Once you have the voltmeter connected it will give you a reading. For a car battery that it's fully charged it should read around 12-13 volts.

This is because each cell in a battery is 2.1 volts and six cells are adding up to 12.6volts, but there is some leeway depending on how old the battery is.

So reading it, some have needles, and some are digital. The digital ones are easy since they display a number, but the needle ones are a little harder. For a needle one, you have to look to see where it lines up and read the volt number.

Some voltmeters have more than one number, so you have to know which one is for volts. Once you do that, you have to do the math to find out how many amps are in the battery if that is what you are worried about.

Some voltmeters do have a spot to tell you amps, so if your has that number and that is what you want to know, then you don't have to do that math to convert volts to amps.

If you have to do the math, then you need to know the maximum amps your battery holds, and that varies from battery to battery, so you will have to read it.

Once you know, you can take the volts that it has and divide it by 12 or a full battery. You then take that percentage and multiply it by the number of amps your battery can hold to find out the amps your battery has.

You can also use a car battery tester or an automotive multimeter to check how many amps your battery has in it.

Just because the reserve amp hour on most batteries is low doesn't mean you shouldn't be careful with them.

Most car batteries can deliver a lot of amps at the beginning for a short period when cold cranking, so when working with your battery trying to find the amps out you need to be careful and use safety precautions.

Wear insulated gloves, and make sure that no wires are exposed that could lead to you getting electrocuted or a short happening.

So after reading this, you now know that car batteries come in a wide range of amps. Most, however, are in the range of 40amps to 120amps or so, and the bigger the vehicle, the more amps the battery can hold.

If you can't do that though, then you can use a resistor and apply a charge to the battery and see how long it takes to drain. You can then do some math to estimate the amps.

Lastly, if you know the amp your battery should be and want to find out if yours has that much, you can use a voltmeter and some math to check that.