How Does A Carburetor Work? 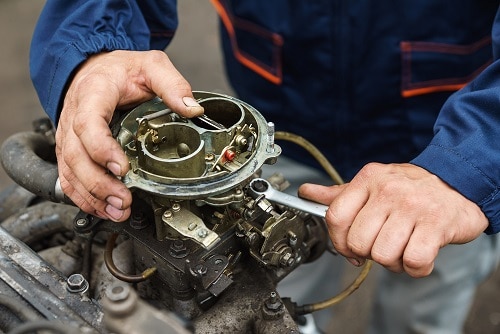 Knowing how the carburetor works are important because you can use this knowledge to diagnose things if your engine starts to run funny. Being able to solve the problem of why your vehicle isn’t running right yourself can save you lots of money from having a shop figure things out for you.

That is why it is important that you keep reading so you can learn exactly what the carburetor is and how does a carburetor work.

Before getting into detail on how the carburetor works in your vehicle we are first going to talk about what it is. A carburetor or carb for short is a mechanical device that is located in the engine. The job of the carburetor is to control the fuel and air mixture in the cylinders of the engine to make sure the engine will run correctly.

Nowadays most vehicles actually don’t have carburetors. Instead, cars today have fuel injection and sensors and computers are able to control the air and fuel mixture in the engine. Before fuel injection was invented though, it was carburetors that controlled this. This made them a key part of the engine.

Why is it important?

The reason that the carb was a key part of the engine was that if it wasn’t working right, then the engine would not run smoothly. That is because you need the proper amount of fuel and air in the engine to get the proper combustions.

If you have too much fuel and not enough air, which is known as a rich mixture, then you are losing efficiency and the combustion will be too big which can damage the engine.

If you don’t have enough fuel though, or too much air, which is known as running lean, then the engine has to work harder to produce the amount of power that it should produce. These reasons are why it is important to have the proper mixture and why the carb is a key part of the vehicle. Even today these concepts are important even with a fuel injection vehicle.

How does the carburetor work?

So, now that you know why the carburetor is so important we can move on to how it works.

Once you know how it works you will understand how it is able to keep the air and fuel mixture right in the engine without having all the electronics and computers inside of it like modern fuel injection.

The basic carburetors work like the following. Air comes in thru a pipe and into the engine. The pipe is shaped like a capital T and halfway down the pipe, there is a valve. When you first start the vehicle this valve, or choke, closes almost all the way allowing more fuel into the engine. This allows for a richer mixture so the engine can start.

The way the fuel is drawn in is the air passes thru a narrower part of the pipe called the venture. The air being forced thru the narrow kink causes the air pressure to drop and the drop in this pressure causes suction to form pulling the fuel in. In the bottom part of the pipe, there is the throttle.

This is what swivels and controls the actual amount of fuel getting into the engine. When you hit the gas pedal it moves and more fuel goes into the engine allowing you to go faster. The air and fuel mixture flows into the proper cylinders.

The gas in a carburetor system is kept separately from the main fuel tank to prevent too much from going in. It is held in a mini-fuel tank that uses a float-feed chamber. As gas flows into the engine the level in the chamber drops and so does the float. When the float gets to a certain point it opens a valve and lets more gas into the chamber from the engine. Then the level raises and closes itself off once the float is back at the proper level. This explanation of how a carburetor works is the simple basic explanation. The thing is there are a lot of different carburetor designs, but they all work in a similar way. The carburetor has actually been around since the late 19th century, so a lot of changes have been made to it, but the main point of it has stayed the same.

So, now that you know the basics of how a carburetor works we can talk about some different kinds. The main way a carb is described is how the air enters it.

The reason for the difference is that motorcycles have less space and making the carb sidedraft makes it more compact.

The other big difference that you can find with carbs is the venturi size. The size of the venturi is important because it controls how much air gets thru and in turn how much fuel.

In a carb, it is the job to mix the fuel and air evenly and to turn the liquid fuel into a gas. The venturi is a key part of this. By adjusting the size of it you can make sure to get a more proper mixture of gas and fuel for that particular vehicle. That is why it is important to match a carb up to an engine that it was designed to work with. The carburetor is responsible for fuel mixture and they are not interchangeable from one type of engine to another.

You can also get into more detail of slide carbs versus butterfly carbs which are different designs that allowed fuel and air indifferently, but this idea is a lot more advanced than this article is going to go.

The key part of this article is so you can know how a carburetor works. It is also important to know the purpose of the carburetor as well if you are going to truly understand how it works. Now after reading this though you have a good basic understanding of what a carburetor is and what it is used for in your vehicle.

On top of that, you know the basics of how a carburetor works, and even though there are a lot of different types of carbs they all serve the same purpose and follow the basic principles that you now understand.