Do You Need A Resonator On Your Exhaust? 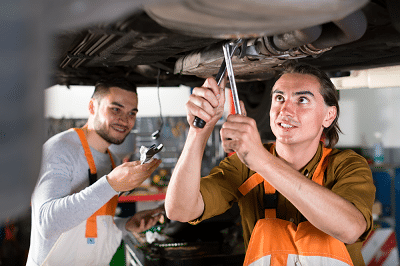 Your car has many different systems, and they all serve their purpose. The main system in the car is the engine. This is what allows your car to run, but at the end of that system is the resonator and muffler.

The main part we will be looking at is the resonator and answering the question of do you need a resonator in your exhaust system.

What is the Resonator?

Before getting into if you need a resonator or not, we first have to look at what it is. You can’t determine if you need something if you don’t know what it does after all.

A lot of times people get the resonator confused with the muffler. The two parts are not the same thing. The muffler is the part that sticks out of the rear of the car, and the resonator falls right before it.

The resonators job is to reduce the sound before it gets to the muffler. This makes the mufflers job easier and allows you to have more power and better fuel efficiency.

An exhaust resonator is a chamber or tube that is a cylinder. It is the first part of the muffler and normally right after the catalytic converter, but not all mufflers have resonators attached.

The thing is resonators can be shaped differently and designed differently depending on the vehicle. We don’t need to get into the specifics though of the different shapes to understand how they function though.

How does Resonator Work?

To understand how it works you need a basic understanding of what it looks like, and it is a tubed chamber is enough. The basics of how the resonator reduces the sound are the sound enter it, and then the sound waves bounce off the walls of the resonator.

As they bounce off the walls, they change pitch and then sounds of the same pitch hit each other canceling each other out.

With the resonator, it actually cancels the higher pitch sounds out easier, and those are the ones that the muffler has a harder time with, so by the sound waves passing thru the resonator before the muffler, it reduces the tough sounds and also changes the sounds.

The resonator will resonate some, and that is how it gets its name and also how the sounds are changed some.

Outside of reducing the sound through the resonator also creates back pressure in the exhaust system. This helps the car to be more fuel efficient.

The back pressure makes sure the exhaust comes out at the proper rate. This allows for top performance with the least amount of sound.

If the resonator provides so much good then with reducing sound and increasing performance and efficiency, then why remove it? Well, some people want their cars to be louder than stock.

Some people like the sound that comes from the power of their engine. If you want your car to be louder, you can change the muffler, but another option is to remove the resonator or put in a different one.

Should you remove the Resonator?

So, now that you know what the resonator does in your car’s exhaust system we can address the question of should you remove the resonator.

The answer is it depends on what you are trying to achieve. If you want a little more noise from your car, then you should probably not remove the resonator.

Just change the type of muffler you have on it. If you want a lot more noise though, then you could consider removing the resonator and just putting a straight pipe in.

Removing the resonator is purely for a sound point though. It will not give you any more power by removing it.

It can actually cause your car to have less power or be less fuel efficient because like we have mentioned the resonator helps make back pressure that keeps the exhaust flowing right.

So, now that you have read this you should be able to make the decision on if removing your exhaust resonator is right for you. You now know what the resonator is and that it is different than the muffler.

You also know the basics of how it works and the kinds of sounds it blocks out and how it does it. With this information, you can determine if you want your car to be louder and if removing the resonator might provide the sound you want.

If you want your car to be a little louder, then I would recommend leaving the resonator on, but if you want the car to be a lot louder and don’t care about fuel efficiency, you can remove it completely.

The other option is taking the middle ground of changing the muffler and or the resonator. With your exhaust sometimes you might have to experiment to get the sound you want and test to see if removing the resonator on your exhaust is the right thing for you to get the desired sound from your vehicle.

So to wrap it up and answer the question with a direct answer, do you need an exhaust resonator? No, but it is useful and recommended in most situations.

2 comments on “Do You Need A Resonator On Your Exhaust?”