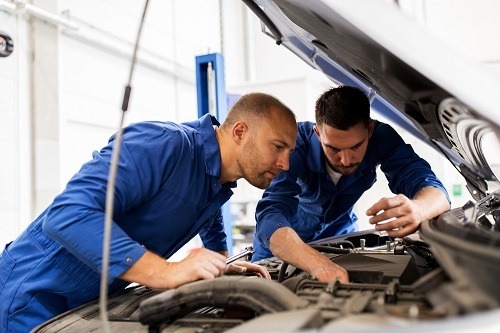 What does it do?

A lot of the signs that come with a failing crankshaft position sensor have to do with the engine and how well the car runs. This should make sense because like has been mentioned the sensor controls what gear the car is in and also what cylinders are firing. If it is sending the wrong signal, then the wrong sensors could fire, or the car could be in the wrong gear. This can cause a lot of damage to the engine and the transmission. That is why if you notice the symptoms below, you should have your car checked out as soon as possible.

The first sign of a bad crankshaft position sensor is a check engine light.

When you have a check engine light, you should always have your car's computer scanned with the best OBD2 scanner as soon as possible.

The car telling you something is wrong is a good way to catch a problem early before it becomes bigger. If you have a check engine light, have the cars computer scanned and if the code is for the crankshaft position sensor, then have it replaced.

Sometimes though the computer won’t notice a problem with a sensor. This is especially true if it is just in the process of starting to fail, but hasn’t all the way. The next thing to pay attention to when it comes to the ESS is when you start the car. If the car struggles to turn over, then that is a good sign that the crankshaft position sensor might be faulty. That is because it starts monitoring the crankshaft right away and this helps the car to start to know which cylinders to fire. When starting the car, there are only a few things that could keep it from starting, so the problem is easier to find during this step.

Sometimes though the car will start fine and then the sensor will start to cut out while driving. If this happens, then you might start having engine misfires. The problem with just going by misfires though is that it could be a lot of different sensors that could be going bad.

If you start to have misfires and don’t have an engine code, then you will start having to check the different sensors that help the vehicle run. The crankshaft position sensor is one of them, and if the others check out fine, then you should check it because it might be the sensor that is failing.

Again if your engine stalls while driving, then it could be a variety of sensors causing this problem, but it means you have an issue and need to investigate. For the crankshaft position sensor, a lot of times the engine will stall at slower speeds. If you have an engine that is stalling which means shutting off randomly, then you should have all your sensors checked out till you find the bad one that is causing your car not to run properly.

The next symptom of a bad or failing crankshaft position sensor is a loss of fuel efficiency. Not everyone keeps track of their mileage, but you should because a change in fuel efficiency can be an early sign of a lot of potential problems. The reason that your fuel efficiency will start to suffer from a bad crankshaft position sensor is that since the timing of the car is off too much fuel might be going into the cylinders because it might be having the engine fire the wrong cylinders. This will cause damage to the engine as well as loss of mileage.

Outside of engine problems you might also start to experience acceleration problems. That is because the ESS is responsible for monitoring how fast the crankshaft is rotating and establishing the RPMs of the engine. It then uses this information to pick the gear the car is in. If the sensor is not reading your speed right, then it won’t change gear correctly, and this will make it harder to accelerate. On top of this, you might also experience a loss of power with your vehicle. This is again because the car might be operating at a gear less than what it should be.

So, now you know all the signs of a failing crankshaft position sensor. You know that most symptoms have to deal with the engine and the car not firing correctly, but some have to do with how the car accelerates. You know the big one to pay attention for is a check engine light and that the car should be scanned whenever it comes on so you can have the problem fixed right away. Making sure all your sensors are working right is important to keep your run working properly longer. This is especially true with your crankshaft position sensor because if it is bad, then your engine can suffer a lot of damage. That is why it is key to be aware of the symptoms of a bad crankshaft position sensor, so your car will stay running properly at all times.