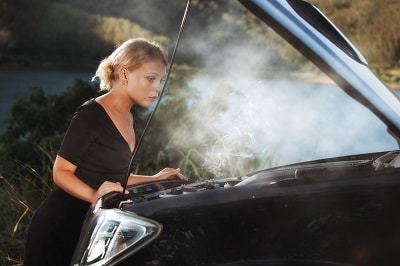 A lot of times if you have smoke coming from under the hood of the car you will probably think your car is overheating. This is a good possibility of what is happening, especially if it is a warm day outside.

What if it is cold outside though or your gauges don’t say the car is overheating. Well, there are a few other causes of smoke coming from under the hood and after reading this article you will know what those are and what to do about them.

Kinds of smoke from your car

When you have smoke coming from under the hood it can be from a range of things, and the color of the smoke can help you figure out what it is.

Normally the smoke is black, gray/white, or bluish.

Also, the different kinds of smoke will have different scents to help you figure out the problem as well.

Smoke comming from Under Hood

If the smoke coming from under the hood of the car smells like asphalt or tar, then it is probably burning oil.

If the oil is escaping from the system and dripping on to parts of the engine, then it will burn off.

Also, sometimes oil will get into the fuel system or engine and burn from the engine running.

This happens when a gasket gets bad. If you notice your oil getting lower or burning off, then you need to have your oil system looked at.

If it is your oil burning, then you need to have the different gaskets replaced. This is because over time the burning oil will damage the engine.

Also, you don’t want to oil to burn and lead to you driving on low oil because that will lead to really expensive repair cost and possible even your engine blowing up.

Having the seals and gaskets replaced to prevent the oil burning won’t cost you a whole lot, and will save you money in the long run because you won’t have more severe damages or keep having to replace or top off your oil.

Another type of oil smoke comes from the filler cap. This is especially true as your car gets older. Residue builds up on there and when the engine gets hot it will burn off.

This will also happen if the valves inside the piston cylinders have wear. You might have to replace the seals to keep the oil where it is supposed to be.

Another cause of smoke from the filler cap is clogged pcv valves or tubes so if you have this kind of smoke, then you will want to have those checked too.

If the smoke smalls sooty and is black, then the fuel isn’t being mixed right. The air intake system could be malfunctioning and causing not enough air to get into the mixture leading to too much fuel. Also, it could be the fuel sensor is allowing too much fuel to be put out into the system.

Another way you can know if the smoke under the hood is being caused by too much fuel or not a proper fuel mixture is if the engine is backfiring. A backfire mixed with the smoke is a good indicator that the fuel mixture isn’t right.

If you have black smoke, then you will want to have your different sensors that are involved with the fuel system checked to make sure they are functioning right.

If all the sensors are still in working order and you are getting black smoke, then you might want to change the spark plugs and have the cylinders cleaned.

This is because it could just be leftover residue burning off. This last case is especially true if you have an older car with an older engine because each explosion in the cylinder creates a little residue and overtime it will build up and burn off causing black smoke too.

If the smoke doesn’t have an odor and is white, then it is probably just water burning off. Condensation can build up on parts under the hood and then burn off once the car gets going.

If the smoke is white or gray though and has a chemical odor, then it is probably something else burning.

The most common thing it could be is coolant burning off. If the coolant goes into the overflow tank it might burn off causing white smoke. Normally this isn’t a problem, but if you notice your coolant getting low, then you will want to make sure to refill it.

Other chemicals burning off though can be an issue. If the smoke has major chemical odor then it might be power steering fluid or transmission fluid leaking. If it is either of those, then you will want both those systems to be checked.

That is because if either of those is burning, then you probably have a leak somewhere and that needs fixed. A prolong leak can lead to the power steering failing and a prolonged leak with the transmission is even worse. If your transmission fluid gets low, then your transmission could go out and that is an expensive repair.

The last thing smoke could be coming from is the electrical system. This is pretty uncommon as most of the wires in the car are covered and insulated.

One thing that could smoke though under the hood in the electrical system is the alternator. The alternator might start going out and shorting. This could lead to some white smoke. However, if the alternator is having issues then it should throw a check engine light and low voltage lights, so if the smoke is coming from that, then you should know pretty fast.

So now you know some of the other causes of smoke under the hood besides the car overheating. You also know that the color of the smoke and the scent is a good way to figure out what needs to be checked.

Now that you know that you will be able to know what to do the next time your car smokes and it isn’t overheating.